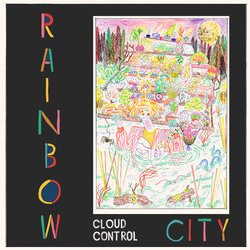 Cloud Control has always been defined by happy chaos, ever since they formed on a whim for a 2005 university band competition. (They had never played together before; they won the next year.)

The uncalculated nature of their formation forms the backbone of their sound as well; sharing the song writing and collaborating on each track, their songs skip from genre to genre without ever feeling disjointed.

The band has become renowned for their vibrant live shows, having headlined festivals and stages around the world, they will be launching the release of ‘Rainbow City’ with two intimate shows this June.

Through ‘Rainbow City’ Cloud Control continue to cement themselves as one of the country’s most intriguing and creative bands. With an album on the horizon, 2017 is bound to be a huge year for one of Australia’s most beloved bands.


Born from a demo jammed at the Bundanon writer’s retreat in the countryside near Nowra, 'Rainbow City' was produced by lead singer Alister Wright and includes a drum track by Heidi, and a piano outro played on Arthur Boyd’s grand piano.

Other tracks by Cloud Control: Zone (This Is How It Feels)  -  Treetops
%