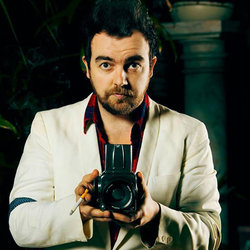 Hailing from Sydney, Australia, Clockwise (formerly Andy Clockwise) latest offering Dancing World is set for digital release on July 15th and is the first of a two-part “ode to conflict, both internal and external.”

Andy Clockwise is one of the brightest talents in music today. After relocating to Los Angeles, Clockwise quickly became immersed in the eclectic music scene, and fast established himself as a must-see live act in Los Angeles. His success eventually landed him sold-out shows as well as support slots with The Strokes’ front man Julian Casablancas, The Black Keys, INXS, Wolfmother, The Wailers and Hugh Cornwell of The Stranglers.

Known for his legendary, verbose shows, Clockwise has fostered a loyal local and international fan base and a well-deserved reputation as an artistic wunderkind of the new generation of independent musicians. He records, performs, produces, and mixes all his records, which include the critically acclaimed Classic FM, The Socialite and the Clockwise brand of “schizo pop” is assuredly on display on his forthcoming EP ‘Dancing World’.
We can look forward to the famous Clockwise live shows when he returns to Australia later this year.