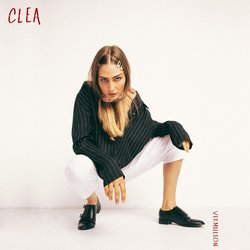 At the core of Clea’s music is the melodic pull, each song drawing the listener in to a world of both discovery and recognition. For Clea, writing music usually starts with the guitar, the strummed melody revealing the sentiment.
Released Friday 23rd November, Clea’s debut album ‘Vermillion’ explores social conditioning and offers a realisation that we all have control over our lives; the trick being to relinquish control altogether.

Clea has created a name for herself with her live performance, jumping on board tours with Holy Holy, Alex the Astronaut, and King Princess. She also announced her signing to New World Artists booking agency in October.
Clea’s deep immersion in all aspects of the creative process has become second nature, leading her to co-direct, style, and edit the majority of her photoshoots and filmwork, as well as designing and producing promotional material, including posters, merchandise, and cover artwork.

Emerging from Clea’s transition to adulthood, the now 22-year-old has dropped her debut album ‘Vermillion’ and will embark on a national album tour in support of the release. The album explores social conditioning and offers a realisation that we all have control over our lives; the trick being to relinquish control altogether.


After turning heads with the release of her debut album ‘Vermillion’, Clea is thrilled to share her next single, ‘Right Way’.

Clea recorded ‘Vermillion’ together with her partner, musician/producer Alistar Richardson, in a hand-built recording studio perched over a lily-strewn dam in the Scenic Rim in Queensland.