Claws And Organs - Bite My Lip 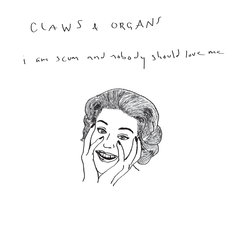 After releasing their well-received debut EP and playing more ferocious live shows across Australia than they can count, Claws & Organs have served up their latest EP, I Am Scum And Nobody Should Love Me.

Recorded live to capture band’s dedication to tight but visceral live shows, which have been described as a “walking OH&S hazard”, the EP was recorded in at a rapid-fire rate at Melbourne’s Head Gap Studios (Courtney Barnett, Violent Soho) with veteran Neil Thomason (My Disco, Jen Cloher) in charge of recording and mixing duties. Neil’s guidance throughout the project ensured Claws & Organs were putting the best forward in their raw, unadulterated form.

The EP marks the inauguration of bassist Heather Thomas in co-songwriting duties, resulting in a departure from the band’s first offering, Nothing To Learn, taking on a darker and moodier, shoegaze-influenced sound whilst still retaining the band’s signature hard-hitting, fuzzed out aesthetic. The band has embraced the male/female vocal interplay, reminiscent of Pixies and Sonic Youth, with Heather’s soft vocals contrasting David Crowe’s harsher tones.

I Am Scum and Nobody Should Love me treads along the line between unashamedly kicking guitar rock and brooding pop with a rare intensity.


Using the guitar’s low tones, the archtop takes over rhythm guitar and bass duties, allowing Heather Thomas to flex her guitar skills on the track. Lyrically, Bite My Lip describes a night in which plans go astray with terrifying consequences.

Other tracks by Claws And Organs: Honorah  -  Die!
%