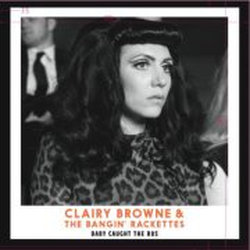 Fierce leading lady Clairy Browne and her harmonizing girl group, The Bangin’ Rackettes, have been tearing down the house at venues all over the country since 2009 with highlights including touring with the Big Day Out, playing Golden Plains and Melbourne Festival. Now with their debut album in hand 'Baby Caught the Bus', the nine piece rhythm and blues big band’s original songs take you through northern soul, jump blues, doo-wop, ska and gospel with influences ranging from Etta James, Tina Turner and Prince to D’Angelo and Salt n’ Pepa. Clairy Browne & the Bangin’ Rackettes set their own scene. Sweaty, gritty dancehall circa 1964, big make-up and even bigger hair, late night dirty dancing, cigarettes hidden in beehives, high gloves and lights down low.

"Clairy Browne struts the stage like a sultry mistress, weaving her way through the trio
of Bangin’ Rackettes backup singers – in truth Browne completely owns everything
about the set. From whisper quiet touches to fierce roars, she entangles the room in
her enormously powerful vocal range." Time Off Magazine


'Love Letter' is an upbeat track complete with backing harmonies, hand claps and a full procession of keys and horns reminiscent of 1960's northern soul motown greats such as Tina Turner and the Ikettes.

Other tracks by Clairy Browne & the Bangin' Rackettes: She Plays Up To You  -  Frankie
%