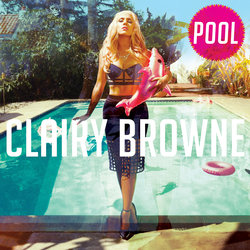 Australian singer and songwriter Clairanne Browne broke through as the bold, fun-loving frontperson of Clairy Browne & the Bangin' Rackettes, a high-powered retro-soul act that released the acclaimed Baby Caught the Bus in late 2011. Following collaborations with RuPaul and Paul Kelly, and a U.S. tour with the Rackettes, Browne met Amanda Warner (aka MNDR), a songwriter, producer, and recording artist known most for her contribution to Mark Ronson's Top Ten U.K. pop hit "Bang Bang Bang." Browne and Warner, as well as a number of fellow songwriters contacted by the latter, worked on Pool in Los Angeles. Released on Vanguard in April 2016 as Browne's first proper solo album, it included some material that was squarely retro-soul but widened the stylistic scope to include late-'70s disco-funk and contemporary pop among its inspirations. Browne aimed to achieve mainstream success with its singles, including "Vanity Fair" and "Love Song to the World."


Taking a cheeky look at the heightened narcissism of 2015, where fake booty and selfie-sticks rule the world, 'Vanity Fair' is a solid departure from Clairy Browne's former Rackette’s sound, presenting subversive and incredibly catchy pop.

Other tracks by Clairy Browne: F.U.B  -  Love Song To The World