Cigars of the Pharaoh - Sincere Karma 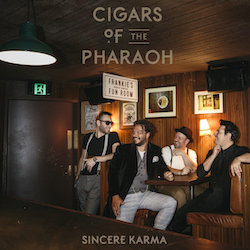 Cigars Of The Pharaoh are lighting up the Australian live music scene. It’s big, it’s bold, and it’s and laden with hooks that will bring you coming back for more.

The band formed in the early part of 2015 as a four-piece, a mixed bag of guys with a multitude of musical experiences that was always going to produce something unique. Since then, the band has shaped into something so fresh, your teeth will never feel clean again.

Cigars Of The Pharaoh released their debut EP Mystery Highway in 2015. Hooking up with Sean Carey (Thirsty Merc) at Church Street Studios, they laid down a four-track record receiving airplay in Australia, the US, South America other exotic locations.

Cigars Of The Pharaoh continue to evolve their sound, and the driven quartet is well on the way to becoming one of Australia’s hottest new musical acts, with a sound all of its own.


Sincere Karma came about like so many of the band’s tunes do — a random riff at rehearsal. But this time it was different. With the band moving to a new two-guitar line-up, this time it was massive, a big, bold new sound that shakes the very foundations of the traditional rock sound.