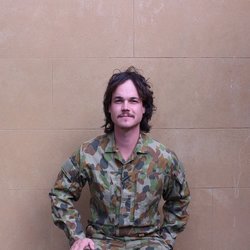 Hobart singer-songwriter Christopher Coleman has formed an eight-piece supergroup featuring members of Augie March and The Drones to record his third album, The Great Tasmanian Escape. Now the band is ready to introduce listeners to Jesse, their debut single and the album’s central character.

Recorded in August 2018 at Melbourne’s Sing Sing studios, The Great Tasmanian Escape was produced by Glenn Richards (Augie March) and made possible through the patronage of Kirsha Kaechelle (Mona).

The Great Tasmanian Escape is album #3 for Coleman with Ah, Winter (2016) and the debut, Christopher Coleman Collective (2014) all released on Coleman's own label, Oscar Treehouse Records.


I wish to acknowledge the family and friends of Jesse who today enter the courts for day two of the coronial inquest into their beloved’s suicide after returning home a broken man from serving for Australia in Afghanistan.