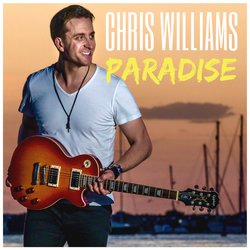 Chris hit the Australian Charts by storm with his debut single ‘Shining on You', follow up single 'Speed Of Light' and then “Live in the Moment” and "City Lights" all reaching the Top Ten in the Country Tracks Chart. Chris was also nominated for a Southern Star Award for CRS Australian Independent Rising Star Male, a Tasmanian Independent Music Award for Country Rising Star and is nominated for an ICMA Award for Most Popular Independent Male Artist to be presented at Tamworth during the Tamworth Country Music Festival in 2020.

Born in Melbourne in 1979, CHRIS WILLIAMS learned to play the guitar at age 12 and he grew up with an avid appreciation and a real passion for music. He performs regularly across Melbourne at venues such as Crown Casino.

Influenced by the timeless music of Fleetwood Mac, Keith Urban and Tom Petty, Chris has developed his own guitar driven country rock songs that are catchy and purposefully geared to lift your spirits


Paradise is a catchy upbeat song about looking for your own version of Paradise while also recognising thats it's right in front of us. It's about living our best life right now and being grateful for what we have.