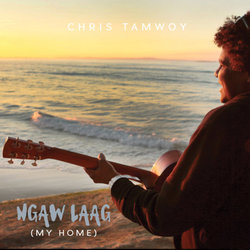 Chris Tamwoy is a self-taught guitarist with a unique playing style and sound. Spending his childhood years with family on Badu Island in the Torres Strait, he now resides in Brisbane. Chris has attracted a lot of attention in recent years, in print media, radio, touring nationally, appearing on various documentaries and television shows including ‘Australia’s Got Talent’, and at many large events including TEDx.

In 2016 reached a national audience through the grand finals of ‘Australia’s Got Talent’ TV Program – finishing in the top 5. He won the National NAIDOC AWARD for Youth of the Year (2015), has been nominated for Young Citizens Australia Day Award, was the feature of a documentary unearthing talented young Australian artists on SBS/ NITV and appears in numerous other short videos and documentaries.

2015 also saw the release of his debut EP – Ngaw Laag (My Home), available now via Impossible Odds Records. Dubbed as a ‘guitar virtuoso’, this humble young man is on the cusp of a promising music career.


Chris says "This track is a dedication to my grandmother, Maulo Tamwoy. She passed away in 2008, and I decided to put an instrumental piece together to recognize her hard work and endless love to raise myself along with all her children and grand children."