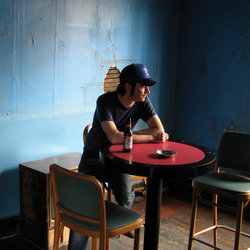 For two and a half years, Chicken Walk was just Chris playing solo with just an open tuned sea foam green Danelectro and a Goldentone reverbmaster for company on stage, enabling him to travel light and cheap. His annual pilgrimages with his wife to the Mississippi Delta facilitated his evolution; from sitting in with the local living masters, to performing the prized Juke Joints with the likes of The Corn Lickers, Cameron Kimbrough, Cadillac John Nolden and Lightnin’ Malcolm.

2011 solidified Chris as a songwriter and performer, playing countless shows across Australia and America, including a memorable performance with highly regarded American two piece Old Gray Mule on their Australian tour.


'Hook it to the Mule', The Snake Hip, Slow Drag, Fish Tail and countless other dances are all about body contact.

'Mule' is a back alleyway sounding boogie from a distant Juke Joint.
So grab a single and a desired one and Don't Hook It To The Mule.