Chris Murphy - Kid From The Country At Heart 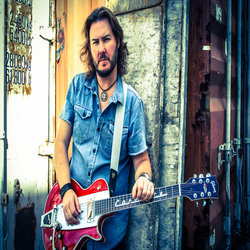 Chris Murphy is best known to the nation for his electrifying performance of 'Evie (part 1) on "Australian Idol" 2006. Marcia Hines noted that it was "One of the most exciting performances we've ever seen on that stage" and Mark Holden awarded it a 'Touchdown'.

Member of renowned WA band "Murphy's Lore", Chris has led the group from its formation in 1993.

Tours to Singapore and supports for legendary Australian acts such as Jimmy Barnes and Daryl Braithwaite have cemented their reputation as one of the most accomplished acts on the scene.

Chris' younger brother and Murphy's Lore keyboardist and vocalist Courtney Murphy came third on "Australian Idol" in 2004 and is now working on his debut album and touring the nation.

Chris Murphy is one of Perth's most prominent solo performers. An acoustic guitar, an amazing voice and a sense of humour are the only tools Chris calls on to deliver a riveting show. Such performances have led to his recent inclusion on the "Kevin Bloody Wilson live in the UK & Ireland 2004" tour, which brought about many accolades for his musical and vocal proficiency.


“Kid From The Country At Heart” sees Australian singer/songwriter Chris Murphy finally indulging his love for country music. Written from the perspective of a country boy living in the city, the track showcases Murphy’s unique vocal abilities, with a great, international, contemporary country sound.