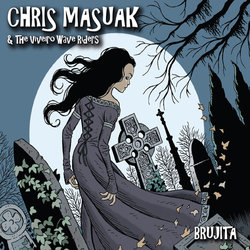 Chris "Klondike" Masuak is a pioneer of Australia's underground rock and roll scene, a guitar hero and a member off the Australian Rock and Roll Hall of Fame.

Canadian-born and Australian-raised, he joined seminal Sydney band Radio Birdman as a teen, went on to Australia's hardest working act, the Hitmen, and tasted US chart success with the Screaming Tribesmen.

Masuak honed his craft in the teeming Oz pub rock scene and now divides his time between Australia and Spain.

"Bruita" is his third solo band album on Sydney label I-94 Bar Records. It's a return to his rock-pop roots and shows his songwriting smarts and soulful yet powerful guitar style.


A driving road tale of a song not divorced from controversy, "Birdbrain" chronicles Chris Masuak's 30-odd years in the ranks of a seminal Australian band (who may not may not have been Radio Birdman) before a forced exit. Why did he last so long? He had to be a Birdbrain.

Other tracks by Chris Masuak and The Viveiro Wave Riders: Brujita  -  Viveiro Rocks!
%