Chloe Christine - No One Cares 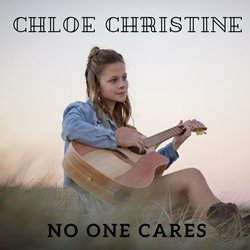 Chloe Christine is a 15yr old Australian singer/songwriter that accompanies herself with her acoustic guitar. Chloe has been singing since she was 5 years old and began to teach herself guitar when she was 11. Chloe always loved writing but really got serious about it when she was 13 and since then, her songwriting skills have flourished.
Chloe Christine sings a variety of genres but has a passion for country music! She started singing it at a young age because judges at multiple eisteddfods told her she had “a distinct country twang”.
Chloe Christine has performed in many events such as; Saving Chloe Saxby Ball 2016, Viva La Gong 2016, Baby Angels 2015 & 2016, Woonona Bulli RSL Anzac day dawn service, 2015 & 2016, Thirroul Carols on the Beach 2016, Thirroul Sea Side Arts Festival 2016, Various performances in Wollongong Central Mall, Woonona Bulli RSL, Woonona bowling club, Illawarra Folk Festival 2017, Carols on Crown 2017, Tamworth Country Music Festival 2018, frequently plays at Il Porchellino in Balgownie and a variety of other performances.
Chloe is a graduate from the 2017 CMAA academy of country music and since going to it, her stage presence and musical techniques have grown!


No One Cares is Chloe Christine’s debut single that was released in 2018. Its an upbeat and fun song showing plenty of attitude. Chloe is trying to make the point that you don’t need to wear makeup and dress fancy, because... No One Cares.