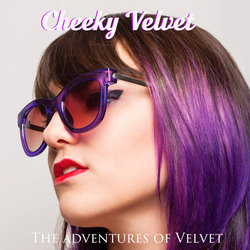 Cheeky Velvet has been crowned a triple threat and likened to industry pop sensations such as Lady Gaga and Katy Perry (Music is My Muse). Her debut EP, ‘Adventures of Velvet’, like her live shows, is a colourful affair. Her adventures travel through the ups and downs of love, full of hickeys, stalkers, ex-boyfriends, toyboys, mumma’s boys and all the crazy ways velvet falls in love back here in 2015, all with a tongue in cheek wit and charm. Adventures of Velvet has ‘the flare of Katy Perry’s one of the Boys,’ and translates in full technicolor to her live shows.

The record was released in late 2015 to a packed house, treating the crowd to her signature live show antics, dancers, costume changes, confetti canons and banter to boot. With her effervescent stage presence it’s not hard to see why she is being called ‘the full package’.

With the lead single, Crazy For You garnering airplay and positive reviews around the Brisbane music scene, Velvet’s adventures are just starting! A string of tour dates are in the works, as well as new music following velvet’s journey in the coming months!


Hickey is the quirky, cheerleader pop rock track off Cheeky Velvet's 'The Adventures of Velvet'. It highlights those crazy heart racing feelings of falling in love.

Other tracks by Cheeky Velvet: Crazy For You  -  Toy Boy
%