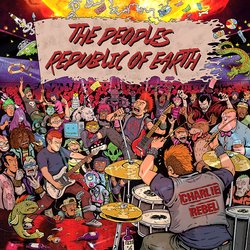 Off the back of their 2017 & 2018 Australia & Japan tours, Gold Coast punk rockers Charlie Rebel have a huge 2019 lined up with a brand-new album ‘The People’s Republic of Earth’ due to hit fans on May 1st. The new album is supported by a 12 show Japan tour kicking off in May, following a local Gold Coast launch on May 4th at Vinnies Dive supported by fellow Gold Coast punks Serial Killer Dinner Party, the explosive Cakes, Tokyo Beef & Pretty Cash.

The band has developed a hardcore following in Japan with their in your face punk attitude and outrageously high energy shows and are again returning with a new album to Tokyo, Yokohama, Osaka and Kobe in May with Human Records to see their Japanese friends and fans. Before they head off they will be dropping 2 new singles from the album. ‘You Know’, a fast paced catchy ska punk song on April 4th and ‘Chutzo Creature’ the albums main single on April 18th, aptly named after their younger sister Courtney (nicknamed Chutzo) who has been following and supporting the band since they were tearing up the family living room.


The numbers are on the wall, but are you going to listen? Painted Numbers is about growing older, but keeping the attitude of your youth. We are never too old to do what we love and enjoy life.