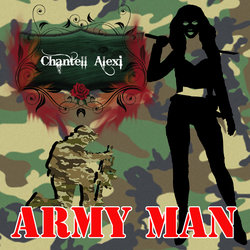 Chantell Alexi started her vocal training in 2002, dabbling in many styles of music, from Classical to Blues, Jazz and Rock and performing with various bands and duos. In 2012 she found her own style in Alternative Country Music and began her solo career, releasing her first solo album 'Road To Redemption' in 2013.

After releasing 3 singles off her first album with music videos she released her second album 'Leather Holster' in 2016 and signed up with CS Management. Since then she has had many of her songs played on Community radio in Australia and overseas and grown as an artist.

Currently Chantell is excited about the 2019 release of her 3rd Album 'Forever Changed', which features the track 'Lucky Girl' and is a reflection of how Chantell has grown as an artist. Hopefully this is just the beginning of big things for Chantell and her song writing.


Army Man is a metaphore for a broken friendship. I was inspired to write the song after hearing about an old friend joining the Army. This friend had once promised to always be there for me, yet in the end were very quick to turn against me. I think that's something a lot of people can relate to.