Cecil B. Fardoulli & The Big Boo - A Foot a'Tappin' Boogie 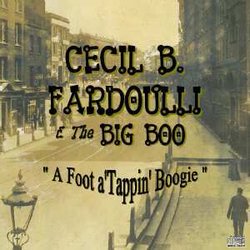 Formed in Melbourne Australia, Cecil B. Fardoulli & The Big Boo are Phill Raymond (Pacific Blues Union) and Billy Kavanagh (Billy Kavanagh's Blues Affliction). Both seasoned professional musicians with many years experience between them they have teamed up together as an acoustic duo and recently recorded a 6 track epCD at Studio 52 in Melbourne.

Through a 'by chance' meeting in a local Melbourne music venue earlier this year, Phill and Billy had a discussion about what they are most passionate, Blues and Music. Like two ships in the night, they were always crossing paths but never seemed to be in the same port together.

They soon realised that they have been encompassing the same scenes for many years and knew a lot of the same people, friends and acquaintances. Eventually the conversation got around to laying down some music tracks from which this current release came to fruition.

Recorded at Studio 52 in Abbottsford Victoria Australia, with well known producer/engineer Trevor Carter at the helm, the 6 track debut epCD - Cecil B. Fardoulli & The Big Boo - " A Foot a'Tappin' Boogie " was born.


A song dedication to Australian Blues Band - Dutch Tilders & The Blues Club.
Dutch Tilders (RIP) was the leader of this very popular band and thrilled audiences wherever they played and also a buddy of Phill and Billy.

Other tracks by Cecil B. Fardoulli & The Big Boo: Take The Tin Lizzie  -  The Big Red Ball
%