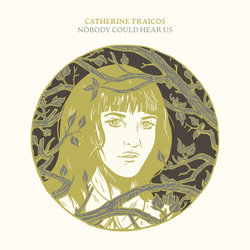 After seven critically lauded studio albums, singer/songwriter Catherine Traicos is back with Nobody Could Hear Us, her most deeply personal yet. Written, recorded and arranged by Traicos, mixed and mastered by long-term collaborator Nick Huggins (The Dirty Three, The Marquis de Tren and Bonny Billy), Nobody Could Hear Us is a lo-fi, minimalist journey through a range of experiences and emotions.

This album was created after years of touring nationally and internationally, solo and with her band, The Starry Night. Catherine has graced such diverse stages as Nashville's Bluebird Cafe, The Sydney Opera House Concert Hall, the Quarry Amphitheatre in Perth and the Junkyard. Her work has been lauded by Rolling Stone Magazine (2013), the Age (2009-2013), the Sydney Morning Herald (2009-2017), and in 2012 she was named Unpaved’s Female Artist of the Year.

During a hiatus in Western Australia, Catherine began writing sketches for songs that she would ultimately record herself, using her knowledge of audio engineering and her enthusiasm for experimentation. The result is an album that is raw and emotive, strikingly stark and a perfect hybrid of the personal and professional craft of a unique voice in Australian music.


In the Light is a love song that was fun to make. I played around with a double vocal line, something I've always wanted to do.

The silvery noise is achieved through scratching back and forth on a borrowed glockenspiel with the bottom end of a paintbrush. Nick (Huggins) put a beautiful natural reverb on everything which just completed it.