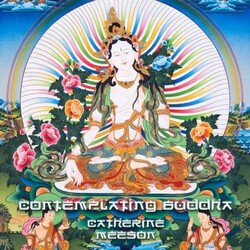 Catherine began song writing in high school , getting a guitar at 13. In 2000, she was introduced to computer software and MIDI methodology transforming the way she wrote songs. She did a few short courses in music technology and returned to study music as a student majoring in voice. Stylistically her music captures many essences, she defines it as ethereal wave, neo psychedelic & progressive electro folk/ rock. It has been described as “atmospheric”, “otherworldly”, “ethereal”, “relaxing”, “trancy”, “cinematic journey music”, “immersive and spacey” “mysterious ambience- portal to another world” “dynamic, rising and falling through seasons from organic folk-infused ambience to strong synthetic beats and luscious guitar textures”. Guitar and vox has been said “Like PJ Harvey on acid” “Like nothing else, unique” “definitely ambient” “like Kate Bush, Patti Smith & Annie Lennox” “enchanting” & with ” metaphysical melodies”. Old English folk, pop, electronic synthesizer music, rock tinges, progressive 70’s, ambient, minimalism, new age, 80’s & 90’s Indie and alternative are all audible influences. Catherine composes both songs and instrumental soundscapes. Lyrical themes are varied:- environmental matters, spirituality, relationships, mythos and story, shades of light and dark with melancholic leanings and existential angst clothed in metaphor.


A transoceanic love story, delivered as a progressive, ethereal wave, neo psychedelic pop/rock song, that is both soothing & stimulating to the senses and heart. It draws one out over the waters with longing embrace and delivers you into the arms of the beloved.

Other tracks by Catherine Meeson: The Outpost  -  The Motherland