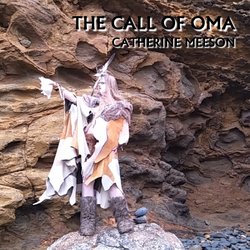 Catherine Meeson is a self-produced independent singer song writer/ composer and performance artist, embracing the art of film and techno bardism. She has released singles and 3 albums under Sonic Sanctuary her own label, receiving airplay in Australia and overseas. Her music captures many essences, one can hear elements of old English folk, pop, electronic synthesizer music, new wave, rock tinges, progressive 70’s, ambient, new age, 80’s & 90’s Indie, grunge and alternative influences and orchestral leanings. She defines it as ethereal electro, & electro folk/ rock. Others have described it as “atmospheric”, “otherworldly”, “ethereal”, “trancy”, “cinematic journey music”, “immersive and spacey”, “mysterious ambience- a portal to another world”, “dynamic, rising and falling through seasons from organic folk-infused ambience to strong synthetic beats and luscious guitar textures”, “like a musical goddess”, “A valuable cool and transcendent ride”, “A Ceremonial psychedelic ritualistic journey into the deep recesses of the mind” , “progressive cinematic indie rock” and “synth prog, or progressive electronic, gothic folk pop”. As a performance artist her work is ritualistic covering spirituality, myth and archetypes in a form of sacred activism. Themes include the environment, spirituality, mythology, relationships, the divine feminine, ethics and existential matters. Find out for yourself.


Only Stories Remained features Oma as narrator telling the tale of what we have forgotten, encouraging us to wake from the long deep sleep, the spell of forgetfulness of deep time, from life before in pre-history. Oma tells a worldly mythological tale, of the fall of the previous cycle of human evolution, where we became mere children playing with bones.

Other tracks by Catherine Meeson: Come Back  -  The Call of Oma
%