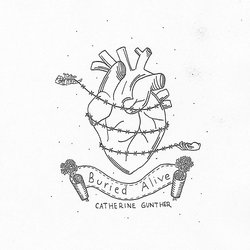 Honest, unapologetic and heartfelt Catherine’s music has always been a bridge between reality and emotions. She tells it how it is and is unafraid to admit how she feels in her music. Raw, emotional and passionate her latest single 'Buried Alive' it’s a story of lost love, painful goodbyes and unexpected change.

Produced by Jared Adlam, Buried Alive is the first of six tracks planned for release over the coming months after nearly 2 years of collaboration.

To date Catherine has released two EPs independently, Livin’ On the Land in 2015 and Bittersweet Memories in 2016. Both were well received and had extensive airplay nationwide on community radio.


Buried Alive is about the pain and betrayal of an unexpected end of a relationship. It's the thoughts of a person processing the sudden goodbye from a person who was their entire world. It's sad, angry, mournful and emotional, as they ride a wave of emotions learning the love they once gave has now left a hole in their heart.