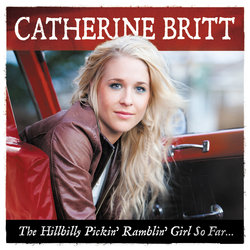 This release gained critical acclaim and was followed in 2001 by her debut album release ‘Dusty Smiles And Heartbreak Cures’. This was followed in 2006 her second album ‘Too Far Gone’ and her third album ‘Little Wildflower’ which was released in 2008 and contained the stunning ‘What I Did Last Night’ that earned her the 2009 Golden Guitar for Female Artist of the Year Award. She won the same award again in 2013 and was and still is the youngest Australian to ever perform at the Grand Ole Opry.

Britt has accomplished the most essential job a singer/songwriter can hope to do: make music that is at once fresh and invigorating enough to speak to a new generation of fans, and yet naturally and firmly rooted in country\folk tradition and the essential truths it has always brought to light.


‘Who Cares’ is a brand new song from Catherine Britt and the opening track of her first greatest hits collection, The Hillbilly Pickin’ Ramblin’ Girl So Far… which is released on November 29 through ABC Music / Universal Music Australia.