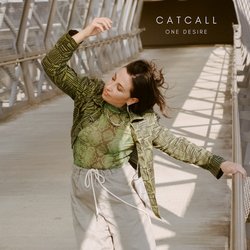 CATCALL is Catherine Kelleher, an electronic pop artist from Sydney Australia. She released her debut album The Warmest Place in 2012 through Ivy league records and has toured with the likes of GOSSIP, PHOENIX and LA ROUX. Her debut The Warmest Place is an album full of life; sex, death, happiness, love, heartbreak. It is a dedication to CATCALL‘s deep love of ’80s pop, but there is nothing disposable here, The Warmest Place is a bold and empowered voice contained within a killer pop record. Since releasing her debut EP, the bratty, hip hop charged Anniversary, CATCALL has come a long way. Her sound has evolved into lush, moody and evocative dance pop, and she has already garnered huge amounts of critical acclaim. ONE DESIRE is the follow up single to 2017's ONE TIME, released on her own label Instant Touch Recordings and sees Catherine helming production duties. A new EP is slated for 2020. Stay tuned.