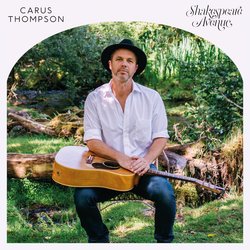 Recorded in Dartmoor, in the South-West of England with Mercury nominated producer Sean Lakeman, Shakespeare Avenue delivers a contemporary take on a rich and distinctive folk tradition.

The album title was inspired by a street name in Bath, Sommerset where Thompson’s late Grandfather lived, before he left his home to settle in Australia.

In the reverse of his Grandfather’s journey, Shakespeare Avenue saw Thompson move his family to Dartmoor to write and record with a new approach, embracing his connection with good friend and folk-star Seth Lakeman.

Interweaving political and social commentary with personal, human tales, Thompson explains “Some of the characters are real, there’s a song about Dylan Voller, as well as a historical narrative about West Australian Indigenous leader, Yagan; while some are fictional like first single ‘Avondale Heights To Sunshine’ - about a suburban dad trying to leave the neighbourhood and its traps that he was born into.

"Shakespeare Avenue, at its core is an album about what it is to be human – to love, to be loved and to aspire to be something”.


"The image of that famous kick earlier this year changed the course of history, I felt that what happened to Tayla was such an acute representation of what’s been happening to women forever. With 'Ship To Come In’ I wanted to show my support for this important issue and hopefully, even if only in a small way, help continue the conversation”.