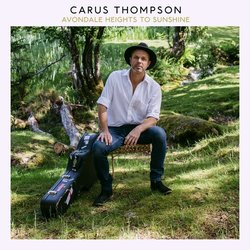 Carus Thompson's emotive songs have earned him comparisons to Springsteen and Mellancamp. New single ‘Avondale Heights to Sunshine’ sees Thompson delve even further into this narrative style, with the song telling the gritty story of a suburban Dad trying to escape the trappings of the suburb he was born into.

For the recording of his new album Shakespeare Avenue, Thompson and family adventured to England for a season. Lured by his connection with Mercury nominated producer Sean Lakeman and Folk star Seth Lakeman, Thompson immersed himself in folk traditions, seeking a new approach to writing and production.


Australian songwriter and storyteller Carus Thompson proudly presents new single ‘Avondale Heights to Sunshine’. Inspired by a taxi driver’s story about a bridge that was supposed to be built between the suburbs of Avondale Heights and Sunshine in Melbourne’s West, the single’s heavy Australian accent is complemented by the folk expertise of Seth Lakeman.