Caroline Taylor-Knight - Fall for Me 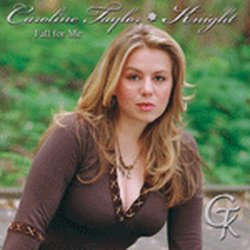 Caroline Taylor-Knight was born in a small country town in regional Australia. At 10 years old she performed solo in front of 1,000 people from her local community and many low key performances followed. Caroline modelled and acted in her late teens, whilst completing her Marketing degree but it was obvious that her true love was always music. Since then, she wrote and released an independent EP, which generated interest from several record companies and publishers, aired on commercial radio and saw her nominated for Best New Talent at the Queensland Recording Association Awards in Brisbane.

Caroline was then selected to launch Australia Post's Rock Australia Stamp series and organisers were so impressed that they invited her to perform four songs (including one of her originals) to open a major football game in Brisbane for a stadium crowd of 20,000 people.

Fuelled by this success and attracting the attention of award-winning producer Duncan Wood, Caroline put her heart and soul into writing and recording her debut album Fall for Me followed by her current album Me Again. Both of which have made a strong impression on country radio and are now being released on AirIt for the first time.


Fall for Me is a beautiful track written and performed by Caroline Taylor-Knight and produced by Duncan Wood. Fall for Me deals with the realisation that the object of your once mutual affection has cooled their feelings towards you and the confusion and heartbreak this causes.

Other tracks by Caroline Taylor-Knight: Stop the World  -  Where Do I Run