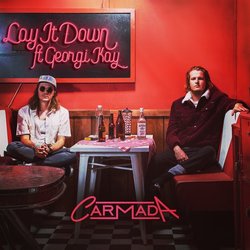 What happens when two great forces of inimitable talent collide and morph into one? Carmada, of course.

Upon finishing their 2014 Splendour In The Grass show in front of a 10k crowd, L D R U and Yahtzel, two of Australia’s most talked about young producers, decided to go beyond their B2B set and previous collaborative efforts by merging their mad production skills and sheer talent to officially form Carmada.

The pair locked themselves away in the studio for the first time after their joint single “The Only One” dropped on Future Classic in March 2014, to create their groundbreaking first EP “Realise” – a release so hot that it hit #1 on the Australian iTunes Album Charts and had everyone from Skrillex to triple j were screaming their name.

Lead single ‘Maybe’ has gone on to be certified GOLD, hit #41 on 2015’s triple j Hottest 100 and has amassed a huge 7 million streams. Carmada have also performed on some of Australia’s biggest festival stages, including Stereosonic and Splendour In The Grass, along with multiple Australian and North American tours.