Caravana Sun - Eye Of The Storm 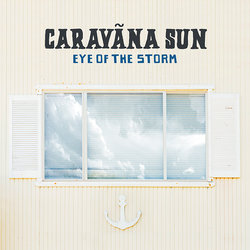 Much has happened over the past 5 years for Caravãna Sun.

With over 500 gigs under their belts – 4 European tours (yes 4!) and 2 albums. The Sydney four piece don’t know the meaning of being idle.

The band is pleased to announce that a brand new single and album is looming large plus a bunch of live dates to boot.

Caravãna Sun headed West to Fremantle and started recording album #3 with Joel Quartermain (Meg Mac/Eskimo Joe) at the helm. This April they release the first single Eye of the Storm from the forthcoming new album.

Midnight Oil’s DIY approach to music and touring provided a major source of inspiration for the album, specifically their Blackfella/Whitefella Tour of remote Indigenous communities with Warumpi Band in 1986.

Caravana Sun’s fifth and biggest overseas tour to date is set for July/August this year. Launching the new album, the band are set to play prestigious festivals throughout the UK including Boomtown Fair, Boardmasters Festival, Electric Beach Festival and Europe

The Eye Of The Storm National Tour is the first taste of the brand new album set for release in June before the band jets off to Europe & the UK.