Captain Hellfire & The Wretched Brethren - All For Rum - Internet Download 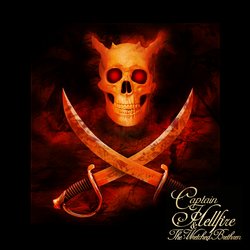 Through the billowing smoke, the flickering flames and the dark ocean spray they come, Captain Hellfire & The Wretched Brethren, the filthiest band of murderous pirates to ever sail the seven seas!

Brought together by their insatiable lust for rum and booty, they play a mixture of true hard rock and traditional music of the sea. Violin and accordion come together with guitar, bass and drums, creating an invigorating blend of music perfectly designed to make you chug rum and jig as though you were possessed by the Devil himself!

In addition to having previously shared the stage with international pirate legends Alestorm and Aussie icon John Butler, the past 12 months has seen the crew play live to over 10,000 viewers for Xbox's "Sea Of Thieves" launch, launch their debut self-titled EP, as well as launch their own video game "Bloodbeard's Revenge", featuring members and music of the band.

2019 is set to see the Captain & crew continue their successful voyages through the local waters and taverns, recruiting more pirates and wenches to their noble cause of continuous rum guzzling and never ending debauchery. Come aboard and join the crew, they sail for glory with the morning tide!


The soon-to-be pirates national anthem: All For Rum! A song in the style of traditional sea shanties, with a big rocking sing-along chorus.

Grab your tankard, raise it to the sky and join in the chorus of "it's all for rum and rum for all!"


Other tracks by Captain Hellfire & The Wretched Brethren: Drink ('Til We Die)  -  Sea Of Fire
%