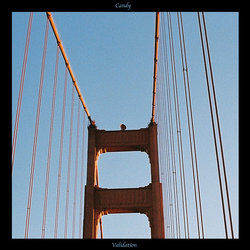 Candy is the solo moniker of Melbourne creative Calum Newton. Formerly of Lunatics on Pogosticks and Amyl + The Sniffers, Candy sees Newton embrace post-punk and dream-pop of all eras – with driving basslines and shimmering melodies crafted entirely in his bedroom.

Having previously released three mixtapes of bedroom-pop through tastemaker label Z-Tapes, in 2018 Candy, released his debut single ‘Apartment in the City’. Taken from his forthcoming debut studio album Under the Weather, ‘Apartment in the City’ is the perfect introduction to Candy – dream-pop without the haze and shoegaze without the distortion; breezy, shining melodies that take stride as the track flies by effortlessly.

He followed this up with 'Hiding from the Sun' which echoed similarly jagged guitar lines and built upon the bright yet melancholic tone of his music; and 'Thankful', featuring swirling synths accentuated by Candy's trademark post-punk bass tones and spitting delivery.


“Validation details the struggle of never being sure of yourself, the constant need for someone to tell you what you're doing is okay” says Candy AKA Calum Newton. The track blends elements of krautrock and post-punk flecked with warmth by Newton’s signature home production.