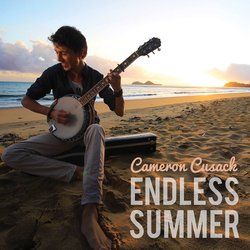 The 2011/13 Toyota Star Maker finalist launched his new five-track Ep at Club Sapphire at Merimbula on May 5 2011 before relocating to Burnett Heads “Bundaberg” Queensland and touring the east coast to promote it. Cameron is now a resident of Cairns. Cusack has ploughed his coastal roots to ignite his writing, singing and performing - rising from street busker to big stage performer in just a few short years.
The singer didn’t wait to be discovered - he entered a vast variety of talent quests on the coast and in Tamworth - with strong support of his musical family.
Cameron recorded his debut CD “Wasting Time” with Dave Sparks at Pirate Studios, north of Eden NSW at Bournda in a National Park.
This time around Cameron headed north and recorded his EP with Brad Bergen at Little Red Wagon Studio in Sydney.
Cusack’s diverse style which he calls “Coastal Country” is inspired by a long line of musical family support dating back to a great grandfather on his mother’s side in Calcutta who played Double-Bass in a Hawaiian styled band, to family members in Brisbane and Melbourne who play in Reggae bands.


This song takes you to your favourite beach with your favourite lady enjoying all summer has to offer leaving the winter way behind. An uplifting joyous track.