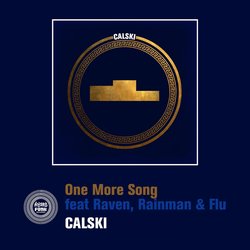 To coincide with the announcement Calski has released the second single from the forthcoming album which features Raven, Rainman & Flu on the aptly titled ‘One More Song’ - a profound insight into the mindset of these three MCs.

After a two-year sabbatical following the birth of his daughter, Calski returned last April with the single ‘All Coming Back’. Featuring fellow veteran Brisbanites, Jake Biz and Lazy Grey, ‘All Coming Back’ was a heavy soul-infused boom bap reflection on times past, appreciation of the present delivered with staunch ambition.

Calski has been a consistent presence in the Hip Hop community in Australia since the early 2000’s. Known for his unmistakable production and thoughtful lyricism, Calski is also a mix engineer, DJ and multi-instrumentalist, playing bass, keys and guitar.


The new single from Calski ‘One More Song’ features Raven, Rainman & Flu and is a profound insight into the mindset of these three MCs.

The hypnotic joint is about the marathon coming to an end, as if this was the last moment before the final buzzer sounds. It’s a rare powerful glimpse into the personal journey an MC walks.