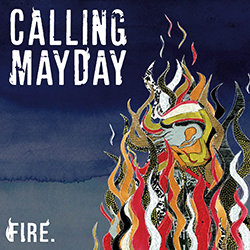 
The 'ballad' if you like but it’s really only a few BPM's down from the other tracks and has an anthemic power chorus.