Caiti Baker - Heavy On My Heart 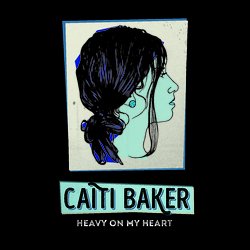 Caiti Baker launches her solo career with the unveiling of stunning debut single, Heavy On My Heart. Gorgeously rhythmic and sassy, the song is an honest, personal reflection on the state of the world and where Caiti sees herself fitting into it all.

Caiti was born into a household filled with vinyl, CDs and tapes of blues, soul, gospel, jazz, big band and rock n roll, her father a respected blues musician. As an artist, she has been drawn to hip hop, R’n’B and neo soul and counts amongst her influences artists such as such as Little Walter, Missy Elliot, Aaliyah, Big Mama Thornton and Lauryn Hill.

No stranger to Australian audiences as one half of acclaimed electro-soul act Sietta, Caiti has also worked extensively with Briggs, who shared his thoughts on Heavy On My Heart, saying “Caiti’s voice is as unique as it is powerful, endearing as it is commanding and as beautiful as it is raw”.

The music video for Heavy On My Heart was directed by The Sutardy Brothers and featuring Caiti herself, performing alongside personal artifacts and imagery.

Caiti is on tour through until the end of the year.


With a unique sound, 'Heavy On My Heart' is an uptempo spring vibe, a little bit of soul, pop and hip hop rolled into a rhythmic and sassy feel.