Cairns Blues Explosion - Two Tickets on the Boat to Heaven 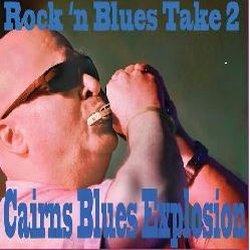 Cairns Blues Explosion based in Cairns Queensland Australia is a five piece blues/rock/soul band headed by guitarist Gordon Sheard and formed in 2013. The band members are Frank Markert (vocalist), Gordon Sheard (guitar), Lochie Gaylard (Bass), Jeff Cripps (Drums) and Steve Ceprow (Blues Harp). The band plays in the Cairns to Port Douglas and Cairns to Cardwell area as well as the Atherton Tablelands in Far North Queensland. For the past three years Cairns Blues Explosion has played at Bernie's Piano Cafe in Cairns every weekend. Cairns Blues Explosion released their maiden CD "Cyclone Susie" in 2016 which charted at number 7 on the Australian Blues and Roots Airplay Charts. This current album "Rock'n Blues Take 2" features 12 tracks, 8 of which are originals (lyrics by the vocalist Frank Markert and music by the guitarist Gordon Sheard and bass player Lochie Gaylard). Tracks range from 50's rock and roll to blues and soul music with ballads and up tempo tunes. Musical direction was undertaken by Jeff Cripps the drummer who also doubled on slide guitar.


This track was written in memory of a mother and her 10 year old son who were lost in a car accident north of Cairns in 2010.