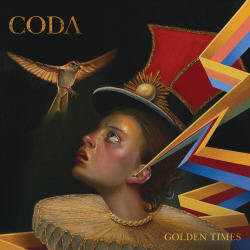 Almost 10 years since the ARIA nominated Calling Mission Mu, CODA return with Golden Times, a refreshingly contemporary album that finds the group dreaming bigger than ever. A daring evolution for the renowned instrumental combo, Golden Times is their first embrace of the voice, combining soaring vocal lines with their cinematic imagination, grandiose string arrangements and absolute freedom in musical style.

Known for oscillating between classical, far-eastern, rock, electronica and beyond, its with the assistance of their ensemble vocal cast that these shape-shifters fearlessly achieve the same on Golden Times.

There's an undeniable filmic element to CODA's productions. Haunting string sections and dreamy beds that unfold 4D Lynchian worlds out of the speakers.

Although it's been a while since the big CODA spectacular has hit the road, band members have been active in their respective fields. Individually they've scored video games and films and esteemed works for Sydney Dance Company, collaborated with Sarah Blasko, launched solo projects, and played with Synergy Percussion and Holly Throsby. Still, they treasure the fun memories of CODA's non-stop touring life - the Golden Times


‘Am I A Pony (feat. Mélanie Pain)’ has received some Bad Dog remix treatment combining dreamy house feels with a driving bottom end. Bad Dog is a roving pack of friends, DJ's and art hounds that have banded together for over a decade outside the mainstream club scene.