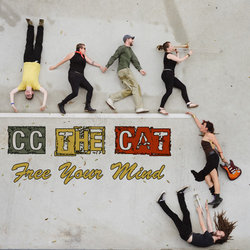 Australia’s premiere female reggae artist CC the Cat delivers honest and uplifting reggae funk and soul music with her powerful voice and anthemic songs, backed by a bangin’ band featuring some of the country’s best musicians, currently proving themselves to be one of the hottest touring acts in the Australian roots scene.

The Brisbane/Byron Bay-based 6-piece have toured Australia extensively over the past 8 years, and have also produced three outstanding reggae albums including 2013’s AirIt chart-topper “Songs From the Sea” and 2010’s “Inna Babylon Jungle”, which was reviewed by Rave Mag to be “one of the best Australian reggae albums” of all time.

After another successful crowd funding adventure, CC the Cat recorded their fourth album “Free Spirit” in Ubud, Bali in 2015 with international producer Benjamin Last. “Free Spirit” is due for release in July 2016.


CC the Cat's latest dub-reggae exploration Free Your Mind takes us on a rocket ship to outer-space, inviting listeners to tune out of the dominant paradigm and live according to personal truth and creative expression. Vocal and brass harmonies intertwine with deep bass and reggae rhythms culminating in energetic enlightenment.