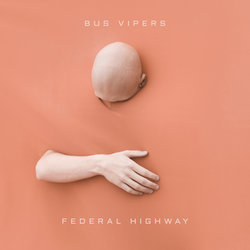 Federal Highway is the main thoroughfare that connects Canberra to Sydney, a road Bus Vipers aka Daniel Ahern drove many times in the three years he spent as one of its residents. After returning to Sydney, he built a studio space in his basement to write and record what would eventually form his debut EP. He wrote thoughts about his time at college in Canberra, where he felt confused by his own identity and stumped by the ubiquity of his peers, his experience in an unhealthy relationship, losing his hair to alopecia at eleven years old, and the universal feeling of otherness.

For the duration of the EP, on which Ahern recorded every instrument (he learnt the drums to achieve this), 'Federal Highway' bursts with trippy guitar licks, distorted synth and giddy psychedelia.

"Pop that gets under your skin” - MAAMF

“Bus Vipers paint an eerie picture of deep sea monsters and young love on ‘Fluid’...heady mix of blissed out garage-pop” - The Line of Best Fit


Coming in at just over 2 minutes in length, 'Palace' packs a punch. It builds on the giddy psychedelia evident in earlier singles 'CSIRO Weeds' and 'Fluid', and puts his crisp falsetto front and centre, with steadying drums and guitars that sound like they could have been recorded underwater.