Buddy Dingo - Mortgage and a Mower 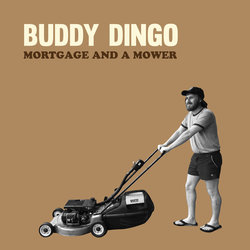 Buddy Dingo is one bloke having a go! He is the brainchild of scruffy mini minimalist Charles Buddy Daaboul. Originally from Greystanes in Western Sydney, he is currently having a little stint living out in the small country town of Narrandera NSW, where he is living in a caravan on a family property by the river. Since playing his first show in October 2017, He has played numerous shows across NSW and ACT and his demos have also received great airplay on Sydney radio station FBi.

His music is very much story based, with a strong emphasis of modern day Australiana. He creates his sound with a raw electric guitar and his signature tongue and cheek with a flavour of wise bogan vocals.
His debut release, Mortgage and a Mower will be released digitally and on a 7" Vinyl on April 6th 2018.


The great Aussie dream to own your house is slowly fading away for those in there 20's and 30's who can barely get a permanent job. With all the challenges to secure this dream, its always good to still be positive and think about the things you already own!

Other tracks by Buddy Dingo: We Grew Up
%