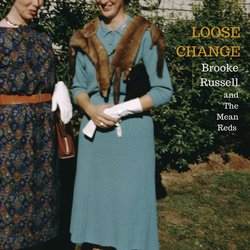 With songs about boozy nights, bad decisions, broken hearts and the best intentions, Brooke Russell and The Mean Reds blend vintage Americana with widescreen, dark country. Culminating in a kitchen in Fitzroy North, The Mean Reds are based in Melbourne and consist of Brooke Russell on voice, guitar and mandolin, Grant Taylor on lead guitar, Ben Franz on pedal steel, Luke Richardson on double bass and Roger Bergodaz on drums.

Drawing influence from alt country, jazz and folk styles, the band are also inspired by the songs of Ryan Adams, Joe Henry, Sharon Van Etten, Gillian Welch, Tom Waits and Neko Case. Their debut album, Poor Virginia was released in August 2013, and listed in Basement Discs Top 10 Australian Albums of The Year and Unpaved's 50 Best Albums of 2013. After showcasing at the 2014 Americana Festival in Nashville, the band released a single, Never’s Gonna Take Too Long in April 2015 and an EP of the same name in December 2015. Brooke recently received a Creative Victoria grant to return to Nashville in March 2016.


The brand new single from Melbourne alt-country darlings, Brooke Russell and The Mean Reds is the first taste of their second full-length album due later this year. Loose Change is a gritty tune about two friends, trying to change their ways but never quite seeing it through.

Other tracks by Brooke Russell and The Mean Reds: Take A Little Time  -  (How Do You) Feel About Fallin'