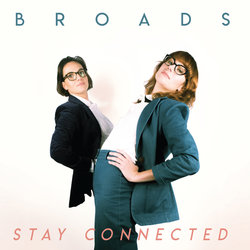 Kelly Day and Jane Hendry have an enduring musical partnership spanning well over a decade. As former (and founding) members of vintage vocal pop group The Nymphs, they became known for their a cappella performances on Spicks and Specks (ABC TV), the Marngrook Footy Show (SBS) and the RocKwiz Christmas Show (2011, SBS).

When The Nymphs called it a day, Kelly and Jane decided to create Broads, an acoustic duo strongly focused on dreamy vocal harmonies, influenced by some of their favourite crooners from across the eras – from Elvis through to Scott Walker, from Nina Simone through to Feist – but firmly carving their own path designed not to fit too comfortably into any particular genre or era.

Together, Kelly and Jane have lent their disarming vocal talent to the music of acclaimed artists such as Tim Rogers, Henry Wagons, Cash Savage, The Audreys and Rob Snarski, among many others.


The focus single from the record ‘Velvet Paradise’ is an understated 60s pop sounding track that retells a late night conversation on a bus. Its background melodies will have you feeling dreamy and it’s a track you’ll just want to keep on spinning.