British India - I Thought We Knew Each Other 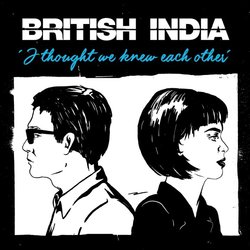 Since the release of British India’s last long-player, the inventive and original Nothing Touches Me – which landed neatly in the ARIA Albums Chart at an impressive #5 – the Melbourne based four-piece has been somewhat quiet, bunkered down in the studio. ‘I Thought We Knew Each Other’ smashes that silence; the song harnesses the stylistic innovations of Nothing Touches Me and synthesizes them with the wide-eyed fury of the band’s earliest offerings.

In support of the new single, and following last year’s hugely successful album tour – which included multiple sold-out shows in Melbourne and Sydney – and rave reviews for performances at this year’s Groovin The Moo, British India will return to the road for an epic 20+ date jaunt. As part of the tour, the band will take their high-octane live show to twelve regional centres along with six capital cities.

Now with a whopping four Top 10 ARIA albums under their belt, seven entries into the coveted ‘Hottest 100’ countdown, and over 10 years in the biz, there is no stopping this indie-rock juggernaut.


Layered in a film of shimmering strings and guitars, and with an unrelenting break-beat to match, the hushed intensity of the song’s verses make way for the dizzying rush of a mile high chorus. Indeed, ‘I Thought We Knew Each Other’ sees the band’s effortless intensity honed razor sharp.