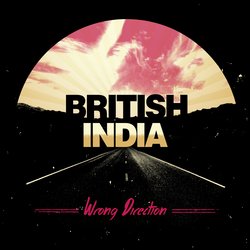 Bold, brash and as loud as ever.

British India’s new single ‘Wrong Direction’ doesn’t skip a beat from where the band last left off with Controller. The single offers the first taste of their yet-to-be-named fifth album, due for release early in 2015.

To complement the release of the single, the band will head out on a national tour, kicking off the same day that the single is released – October 24. The tour includes two very special shows with The Rolling Stones. The band was chosen by the legendary rock outfit themselves to open their massive concerts at Hanging Rock and Hope Estate in November. They are understandably chuffed at the prospect:

“They’re one of the very few bands all four of us truly love and their music has sound-tracked our career since we started,” said singer, Declan Melia.

Emerging from Melbourne’s indie rock underground in 2007 with their ‘AIR Award’ winning debut Guillotine, British India’s popularity grew with each subsequent release. The band’s continued success has cemented their reputation as one of the most popular and successful Australian rock acts in recent years.


Now with their biggest and most successful tour to date wrapped, British India release an edgy, raw and honest track that makes for a timeless indie rock anthem. It follows the release of popular radio singles ‘Wrong Direction’ and ‘Suddenly’.