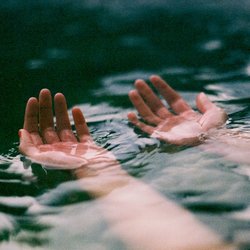 When Alex Knight put out his first album as Brightness in 2017, he figured he was washing his hands of the music industry. He had just spent six years living in London, playing drums in bands that, after a few tours and records, ended up grinding to a halt. His debut solo album, Teething, came from a place of exhaustion; Knight self-recorded it at home in London just before packing up his life and moving back to his native Australia at the end of his twenties. He thought the record marked the end of his tenure in music. Instead, it surprised him by opening up into a beginning.

The impulse to reach for the divine winds through Knight's second, self-titled album as Brightness. "There's a certain type of optimism that comes specifically from being at rock bottom," he explains. "I had to make the choice to no longer look down. I wanted to look up." While writing Brightness, Knight committed himself to expelling the self-pity that inflected his debut. He had been in the darkness for so long that he no longer saw the point in wallowing there. "I didn't want the lyrics to imply any kind of negativity."


‘Feathers’ recalls the bewilderment of being a child and watching his mother struggle amidst the collapse of her marriage. Guided throughout by delicate piano, he paints an image of a woman who despite being at the very edge of her wits is able to endure in being a protective wing to those who vitally need it.