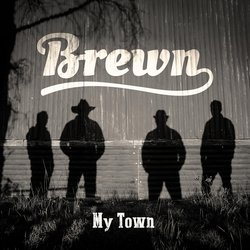 Here is a working class band, writing about their jobs, their cars, their lovers and their hometown, projecting pride in their identity and in a language their fans can understand.

Today, Brewn is known for their unique sound that’s a lively fusion of Australian Country Rock mixed with influences from the pub rock scene. However, before developing their signature style, Brewn began their career as many acts do, as a hard working cover band.

While the band quickly had a respected following for their work in the bar scene, lead singer Mick Bond had always longed for something more. Growing up with strong Country influences, Mick had dreams of pursuing Country music, and developing a project that more fit the style he was passionate about. So, he left the cover scene and got to writing.

After a few incarnations of collaborators, Mick called upon the talent of twin brothers, John Barbara (drums) and Anthony Barbara (guitar) as well as Zachary Whittaker (bass).

Brewn is a well-rounded and respected Country rock act.


“My Town” is an ode to comfortable surroundings and giving thanks to the place that transforms you into the person you are today.
“My Town” will resonate with anyone who is proud of the town they live or grew up in.