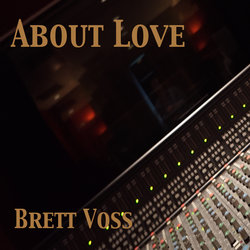 Brett Voss is an artist with a long and diverse history within the Australian Music industry. He worked as guitarist/songwriter with Brisbane based grunge band Filter in the burgeoning music scene of the 90’s. Filter played numerous festivals and venues, recording their debut album while building a solid fan base. Filter disbanded in 1995 but he then formed Starbug, which featured him as primary songwriter, guitarist and vocalist. This band released two EP’s “Starbug” and “All Over Again”. Brett’s work has also been showcased through his first solo EP “Falling Forwards” released in 2010.


Written about the ebb and flow of life, “About Love” was recorded and mixed by Jared Adlam at Machine Lab Studios. The song features country elements, within an indie rock style and draws comparisons to Shane Nicholson and Josh Pyke with a strong pop aesthetic.