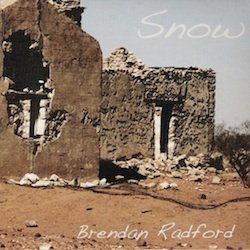 Over the past two years Brendan has been progressively recording a solo album, made up largely of his own material. The first single, ‘Sweet Maree’ was released to radio in March 2009.

‘Snow’ is the second single release and title track from Brendan’s first solo effort. The album features 12 tracks and includes a number of other songs written by Brendan, along with interesting reworks of a few obscure classics. The album also contains two instrumental tracks. Brendan produced all tracks, features on vocals, guitars, harmonica and mandolin, and is joined by some of Australia’s premier musicians, including James Gillard, Mitch Farmer, Jake Lardot, High Curtis, Vaughan Jones, Michel Rose, Mick Albeck, Rose Carleo and a duet with Casey Watt


This is a bright bluegrass style song about a woman who has left her husband and he is trying to convince her to come back. Cool solos on ac/el gtr and piano. Features a solo out section.

Other tracks by Brendan Radford: Snow  -  Stop the Night