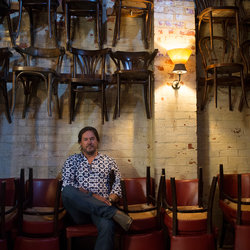 In 2015 and 2016, Brendan released the solo albums ‘Falling To Earth’ and ‘Marker 7-58’ under the moniker of Satellite Gods, collaborating with some renowned Australian musicians from Mark Seymour's band, Darryl Braithwaite's band and The Angels.

After supporting artists such as Boom Crash Opera, Russell Morris and The Chantoozies, Brendan released the LP ‘On This Fine Occasion’ in 2017, which received great reviews both locally and internationally.

“Whatever it is that makes his music just so amazingly addictive, the American audience is ready to take Brendan McMahon in as one of their own" - Cash Box Magazine, Canada

2019, and McMahon is gearing up for the release of ‘In The Moment’ – an album he feels is his strongest yet. Maturity, reflection and from personal experiences, his inspired yet refined lyrics again take listeners on a captivating journey.


Hold On is is a driving, upbeat Country/Rock song. Although a fast paced track, the underlying message is one of support for McMahon's wife after she had to go through the heart wrenching ordeal of putting her very much loved mother in to care due to the debilitating disease, Alzheimer's.

Other tracks by Brendan McMahon: Lost My Way  -  On This Fine Occasion