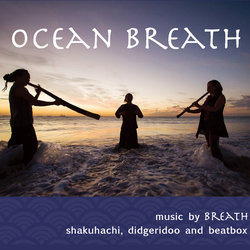 Breath: Anne Norman (shakuhachi flutes); Sanshi (didgeridoo, bells); Reo Matsumoto (beatbox, chant).
'Ocean Breath' features music evocative of the Indian Ocean and the beautiful coastline of Western Australia. Breath have created evocative, meditative soundscapes through to rhythmic dance numbers.
Breath came together in 2012 for performances in Perth, also performing in the Melbourne Didgeridoo Festival and Perth in 2013. This is their debut album. They have a concert tour throughout Japan in Sept/October 2013.
These three musicians bring a wealth of talent and experience to their music. Anne went to Japan as a flute player and began shakuhachi (bamboo flute) in 1986 receiving a string of scholarships from both the Australian and Japanese governments for her shakuhachi studies. Anne has made her living as shakuhachi performer since the early 90s, performing throughout Australia, Europe, America and Japan. Sanshi came to Australia from Shikoku in 1997 and was soon in Arnhem Land studying didgeridoo, receiving the name "Malarra" meaning Manta Ray. He runs a didgeridoo dojo online, and is respected as a didge teacher and performer across the globe. Reo took up beatboxing at the age of 17 and has performed across Europe, America, Asia and Australia, winning several beatbox competitions.